Music, like many of our other recent performance topics, dates back to pre-history. It also is often integrated with other performance genres, such as theatre, dance, and spoken word. In this unit, we will look at music specifically as performance, i.e. how it is presented before a live audience. 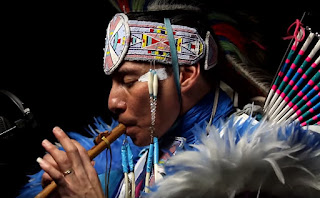 Supaman - Apsalooke Native Hip-Hop Artist
We will consider how live music performance operates as spectacle, a term that goes back to Aristotle's Six Elements of Drama, as it is defined in our unit on theatre: "Spectacle - the visual and auditory components of a play: actors and their costumes, the sets, lights, sound."
MUSIC PERFORMANCE GENRES
OPERA 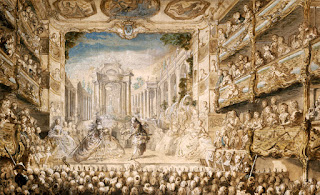 Opera is an immersive form that integrates music, drama, poetry, and visual arts. It originated in 16th century Italy as a way to "re-create the effect of ancient Greek drama, in which scholars believed, the words were chanted or sung as well as spoken". (p. 124)

Opera has worked its way into popular culture, through the music of bands such as Queen, which are adapted here in a commercial.

The rock band Queen used many operatic elements in their music, especially in the dramatic vocalizations and change of mood in their works. The song Bohemian Rhapsody is a prime example of how opera informs their work. 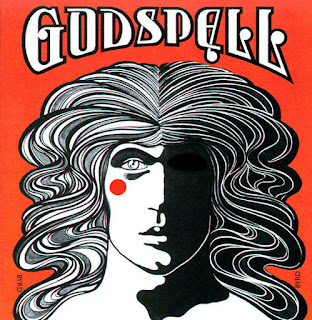 The musical is a popular genre that has come down to the present day from at least as far back as the mystery plays of medieval Europe. These were Christian religious stories that were performed by traveling troupes, who moved from town to town in colorful costumes and wagons. These plays are a mix of poetry, theatre, and music, and continue to be performed around Christian holy days.

What is a Musical? - John Kenrick
"In some of the musically most interesting (religious dramas), poetic forms - often as a sort of set piece - alternate with the prose dialogues and liturgical chants." (Rochard Hoppin Medieval Music)

In the 17th and 18th centuries, first in Italy and then in France, the comic opera developed as a popular form of entertainment, that mixed dialogue with music, in which performers sang arias alongside burlesque performers.

The composer team Gilbert and Sullivan is credited with popularizing the form with their 1878 musical HMS Pinafore.

Some contemporary musicals such as The Phantom of the Opera and Les Miserables look back to the more traditional styles of the past, and the influence of opera. Others, such as Godspell and Rent, embrace popular culture and social issues of the times.


Jazz is a popular form of music that emerged from the African-American culture of New Orleans in the early 20th century and has diffused globally at this point. It emphasizes improvisation, the irregular rhythm of syncopation, and live performance. 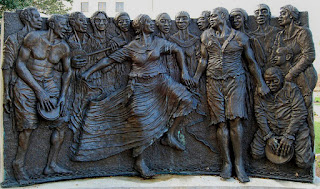 Wale Adenle - Congo Square sculpture relief
During American slavery, slaves were not allowed to gather formally except in New Orleans. Beginning in the 18th century Congo Square became a gathering point for African slaves to practice their variety of regional ethnic cultures.


As the historical plaque states, "The gathering of enslaved African vendors in Congo Square originated as early as the late 1740s during Louisiana's French colonial period and continued during the Spanish colonial era as one of the city's public markets. By 1803, Congo Square had become famous for the gatherings of enslaved Africans who drummed, danced, sang and traded on Sunday afternoons."
Congo Square, the Soul of New Orleans
It is from this rich cultural heritage that jazz was born.

Born in New Orleans in 1901, Louis Armstrong (1901-71) became an ambassador of jazz, averaging over 300 live concerts per year as he performed worldwide. 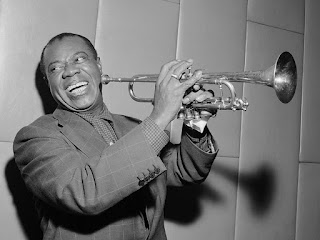 Emerging from a childhood of poverty and taken away from his family as a child, he began playing jazz on riverboats before starting his own band. He was known for his exuberant and enthusiastic style of performance, as a band leader, trumpet player, and vocalist.

The Second Line is a live jazz tradition that evolved out of the jazz funeral, another staple of New Orleans culture. The Second Line is a jazz parade, in which the band makes up the "first line" walking down the street, followed by the neighborhood participants, dancing behind in the "second line".


Free jazz, which emerged in the 1950s, was energetic, boisterous, loud and sometimes abrasive. But it could also be inspirational in its freedom from structure and complete focus on improvisation.

Country music is a genre that has its roots in the Folk music played in the poor and rural white immigrant communities of the U.S. in the early 20th century. It evolved from such diverse sources as fiddle tunes from working class Irish immigrants, English immigrant ballads, and the music that working cowboys sang in the Western U.S.

Originally called Hillbilly music, it became popularized in the 1920s through recording artists such as Jimmie Rodgers and The Carter Family, and a focus in Nashville, Tennessee through the Grand Ole Opry live shows.

In the 1950s, the emphasis shifted to Bluegrass and Western styles, as well as the merging with the African American genre of Rhythm and Blues, that would become known as Rock and Roll.

In today' cultural climate, while still retaining the connection to its roots, Country Music also samples from many cultural forms of contemporary music, including Rap, Latin, Gospel, and Pop.


Rock and Roll is a rhythmic form of popular music from the 1950s that combined such diverse genres as rhythm and blues, country, and gospel. "The limited number of chords makes rock and roll very repetitive and forces focus onto the driving rhythm." (Reality Through the Arts p. 116)

It built on the foundation of Rhythm and Blues. African American r&b artists were played on black radio stations, but were unable to break into mainstream airplay due to segregation. 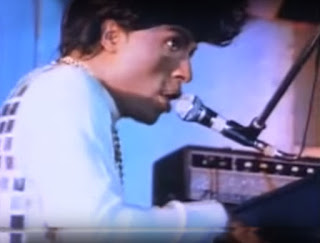 Musicians such as Little Richard, a Southern musician raised in both the church and nightclub environments, brought their music to a larger white audience, and in doing so helped hasten racial integration. In addition, his expression of alternative sexuality also raised awareness of queer identities to the mainstream heteronormative culture of the 1950s.

Elvis and Race in 1950s America

Elvis brought a physicality and sexuality to the performance of popular music, that helped make rock and roll famous with youth culture.

In the 1960s, bands like The Beatles and The Rolling Stones expanded the influence of rock music into Europe and around the world. These bands represented the social freedoms with respect to drugs and sexual expression that came to mark the Hippie Generation.

The Rolling Stones, in particular, were influenced by American r&b music, and lead singer Mick Jagger, who brought an expression of gender/sexual ambiguity to their live performances. They were precursors to the emergence of glam rock in the 1970s, a style that emphasized sexual androgyny and outrageous fashion style, pioneered by artists such as David Bowie and the New York Dolls.

Another branch of rock from this same era that emphasized theatricality in costuming and performance was that of shock rock, which tended to have a more masculine and aggressive approach. Musicians such as Alice Cooper and the rock band KISS typified this style. 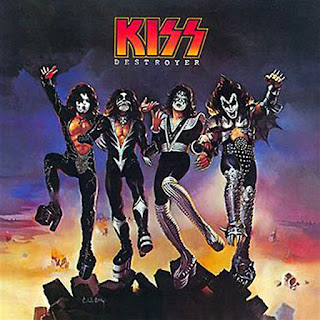 Each of the four members of the band, from New York, developed costumes and a persona for their onstage characters: Starchild, Spaceman, Demon, and Cat and for the majority of their career were never seen out of character.

As we discussed in the unit on dance, Soul musician James Brown was influential in the development of hip-hop and breakdancing through his song Get on the Goodfoot. His live performance style mixed a demanding dance routine with other choreographed movements that have been influential to generations of artists, such as Michael Jackson and Prince.

Rap music and larger hip-hop culture emerged as a socially conscious form in the 1970s that channeled the anger and aggression of the streets into poetic lyrics backed with strong rhythms. It originated in New York, with the parallel elements of hip hop (music), djs (turntablism / scratching), break dancing, and graffiti (art).

It expressed life within inner city culture through the socially conscious stylings of artists such as Afrika Bambaataa, Kurtis Blow, and Grandmaster Flash.

In the 1980s, as hip-hop culture evolved, hip-hop and rap music began to have more distinct identities, with hip-hop becoming more eclectic and focusing on jazz, dance, and African roots influences, with a more hardcore sub-genre of rap known as gangsta rap emerging at the same time. 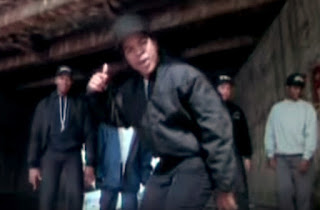 NWA, lead by Dr. Dre, Ice Cube, and Eazy-E, brought this new aggressive and confrontational style of rap performance to audiences with songs such as Straight Outta Compton (strong language and violent themes) in 1988. Based on the West Coast, their social/political music was a lightning rod for both activism and criticism.

Missy Elliott represented a contrast to this with the eclecticism of new hip-hop, featuring a strong feminist identity and African roots cultural expression through polyrhythmic beats and dance.

Music performance has evolved over the centuries, blending with theatre (opera and musical), African influences (jazz), and the blending of American cultural identity and experience (rock and roll, rap / hip-hop).

In today's world of music performance, cultural influences both ancient and modern blend together in new and unique ways. An example of this would be Apsaalooke native musician Supaman, who combines ritual dance with rap music performance.

Supaman Rapping on the Reservation

Another example is Ki & Ki, a Japanese duo of two young women who have adapted the traditional Shamisen style of stringed instrument with a contemporary sensibility.

Posted by Randall Garrett at 3:18 PM