Performance art is presented within the context of visual art, but may also be interdisciplinary, incorporating aspects from a wide variety of genres, such as dance, music, theatre, and spoken word. 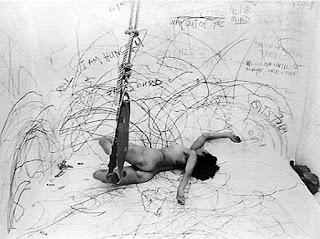 There are four key elements to performance art. They are time, space, the body of the artist, and the relationship between artist and audience. Performance art may be presented live to an audience or may be mediated through film, video, or photography.

There were a number of art movements in the early 20th century that experimented with performance as an aspect of expression, but the genre did not fully emerge until the 1960s-70s. 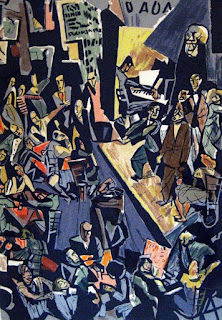 The Dada movement, a grouping of artists with anarchist leanings, emerged as a form of protest in Europe during World War I. In Zurich, Switzerland, led by Hugo Ball, a collective known as Cabaret Voltaire formed in 1916 giving experimental performances of sound poetry, dance, theatre, and music. 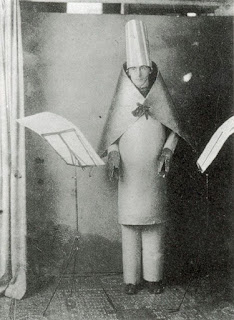 Hugo Ball - Cabaret Voltaire performance (1916)
Dada was an absurdist style, designed to be intentionally without meaning as a protest and critique of the looming world war that would wreak destruction and kill millions across Europe.

The Gutai movement, founded by Shozo Shimamoto and and Jiro Yoshihara in 1954, brought an experimental mindset to artmaking that included performance, although the genre of performance art had not yet been defined. Japan, in a postwar state of cultural rebuilding, was a prime location for artistic experimentation. 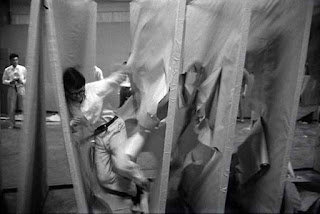 The kanji script for "Gutai" are 具 and 体, mean "tool" and "body", and thus it focused on the immediacy of the artist's body in response to the materials of artmaking. 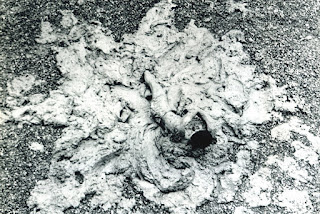 Fluxus was an international network of artists in the 1960s that had a strong influence on the development of performance art. Fluxus founder, the Lithuanian-American artist George Maciunas said: "Anti-art is life, is nature, is true reality—it is one and all."

Originally known as Neo-Dada, Fluxus followed the Dada spirit of absurdity in its process of artmaking, by focusing on the process rather than the finished product, or art object, and was thus against the commodification of art. 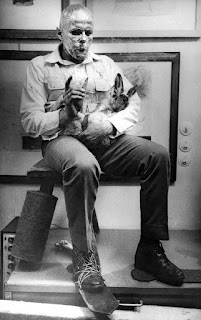 Joseph Beuys - How to Explain Pictures to a Dead Hare (1965)

German artist Joseph Beuys, who survived a plane crash in World War II, saw himself as a modern day artist/shaman. He conveyed the spirit of Fluxus through works based in both ritual and teaching.

Feminist performance art both existed within, and built on the foundation laid by Fluxus, but functioned in a more focused way to critique society and art from a woman's point of view. In that way, it was overtly social/political in purpose. 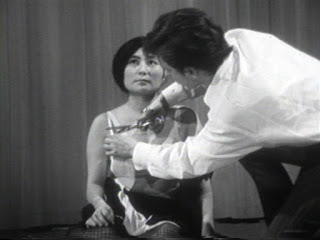 Yoko Ono's Cut Piece used very simple visual strategies, that of the artist sitting passively onstage as audience members cut pieces from her clothing, to convey a sophisticated message on the way women are treated in everyday life.

Carolee Schneemann explored the archetypal symbolism of the woman's body as source of creation in the performance work Interior Scroll, in which she extracted a written text from her own body and read it to an audience. 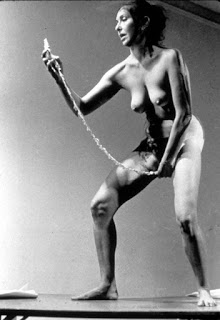 Schneemann was interested in reclaiming the representation of women's bodies in art, in moving them from a passive state of observation to one of decisive action.

In the late 1960s and early 1970s, a number of artists began to directly explore the body as an art medium, testing the limits of both endurance and sometimes pain.


Bruce Nauman took this to absurd limits in his abstract musings on the body and movement that he recorded on video. Works like Walking in an Exaggerated Manner Around the Perimeter of a Square (1967-68) portray him engaging in mundane and sometimes humorous activities in his studio.

Works by Chris Burden, such as Shoot (1971), in which he documented an assistant shooting him through the arm with a .22 rifle, and Through the Night Softly (1973), where he crawled through broken glass on the ground, also explored the body in relation to danger. Besides body art, his work is also considered as a starting point for the endurance-based performance art which was to come in the 1980s.

In the late 1970s and into the 1980s, explorations of the body as performance led to the development of endurance and ritual-based performance art. 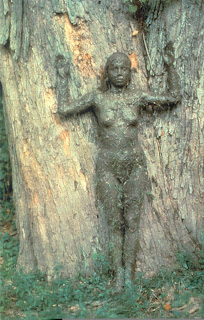 Ana Mendieta (1948-85) was a Cuban born artist who came to the U.S. as a refugee at age 12. Her work explored symbolic archetypes through ritual activities in which she interacted with aspects of nature.


Matthew Barney (b. 1967) is an artist who turned his observations on athletic achievement into performance art. He noticed that restraint is a basic technique used to develop athletic ability, and took that idea into his performances, such as the ongoing Drawing Restraint series (1987-present).

The most recent directions in performance art have been to express identity in all its permutations: cultural identity, ethnicity, nationality, gender, sexuality, and religious identity. 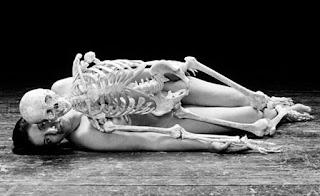 Marina Abramovic (b. 1946) has performed in almost every one of the performance art genres that we have discussed in this unit, although her work truly centers around identity, through both self-expression, and social identity in terms of relationships to others.

Guillermo Gomez-Peña (b. 1955) was born in Mexico City and came to the U.S. in 1978. His solo and collaborative performances with the collective La Pocha Nostra explore cross-cultural Chicano identity. 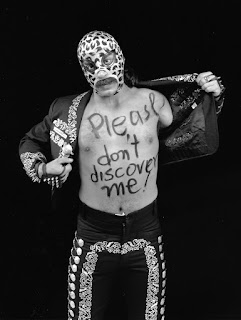 Through various characters set in humorous situations, he takes on notions of intersectionality, the concept of overlapping social identities, and their relation to systems of oppression. 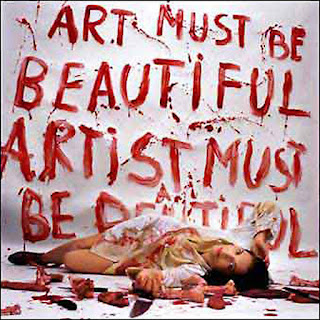 In the last 100 years, performance art has developed from an absurdist offshoot of live theatre into an international cross-disciplinary art form. As it emerged, it has kept its status as both a form of social protest and anti-commodity, while attracting an ever widening audience.
Posted by Randall Garrett at 2:53 PM