"All the world's a stage, and all the men and women merely players." (Shakespeare) 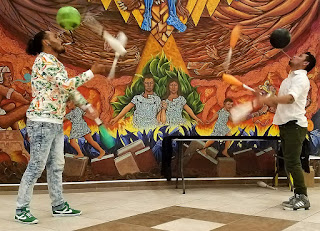 Performance is an action or event with cultural meaning that is presented to an audience. As we have already learned, identity is about being, and culture is about doing. Performance involves both an introspective state of being and an active state of doing.

Let's consider these qualities as we look at some ways that performance takes place in the fine arts. 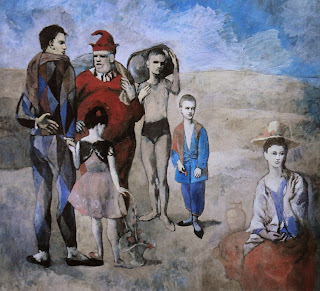 
Saltimbanque is a French word for circus, or street performer. Pablo Picasso's painting of this group of performers demonstrates the connection between performance and everyday life.


Performance may be looked at in a formal context within the fine arts, and also in a sociological or psychological sense relating to everyday life. In the case of art, it may be a formal presentation according to certain customs or traditions.

We have already looked at how culture and identity can be found throughout the fine arts. Now let's look at some ways these are performed.

There are a number of genres in performance, some traditional and others modern. Traditionally performance has been live, but with the development of technological media such as photography, film, video, and sound recordings, recorded and mediated forms of performance have developed.

Theatre is a form of live performance that makes use of acting, speech, gesture, costumes, sets, and scripts. It goes back to oral histories and storytelling methods from ancient times. In modern form, it is influenced by the theatrical productions of ancient Greece. Here is an example from the Greek tragedy Oedipus Rex that attempts to convey this style of theatre.

Theatre is typically performed on a stage before a live audience. There are three main theatre types, that define the relationship between performers and audience. They include:

Arena Theatre - also called theatre-in-the-round, in which the audience surrounds the stage.
Thrust - the stage projects into the audience, which is on three sides, with backstage behind.
Proscenium - stage in close proximity to backstage with audience in front.

The entirety of a theatrical production is known as the mise-en-scène. This includes all aspects of the production. A theatrical script can be presented in terms of realism or poetics. 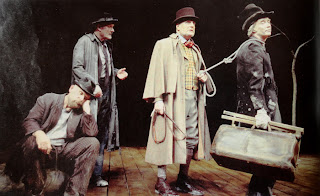 Samuel Beckett - Waiting for Godot
For example, we can comment on the performance of Oedipus Rex and say that it presents a very stylized approach, with the characters wearing masks and speaking formally. They use both poetic language and costuming, rather than realism. The Samuel Beckett play, shown in the photo above, uses realism in costuming, but poetics in language.

Music is another ancient form with an emphasis on sound produced on either instruments or through vocalization. To be considered as a performance genre, music must have ancillary aspects that relate it to theatre, that is movement, costuming, and gesture.

The music performance of Daft Punk at the 2014 Grammy's is a good example of this because it presents a contrast between the styles of different genres, such as the rhythmic guitar playing of Nile Rodgers, the emotive singing of Stevie Wonder and Pharrell Williams, and the more detached style of Daft Punk.

This performance gives us a glimpse at generational differences in music performance styles, with the members of Daft Punk demonstrating a more sedate dj set along with futuristic costuming. They are consciously playing characters, whereas the other musicians are playing themselves.

Opera and musicals are traditional forms of music performance, and rock concerts that make use of spectacle, as well as music videos are more contemporary forms of music as performance. All involve actors or musicians playing a role through musical performance.

Dance describes performance that focuses on movement as characterized by choreography or improvisation. It has existed for thousands of year in traditional forms such as ballet, folk dance, and ritual dance, but also includes modern forms like jazz dance and modern dance.

Csardas is a traditional Hungarian folk dance. The word itself is an archaic Hungarian term for "tavern". It involves male and female dancers dancing together in a lively fashion.


We cannot make blanket cultural statements based on the limited information presented, but can observe that in this dance there are traditional gender roles of male and female being performed, and that the male role takes the lead in the performance.

Alternative genres of performance include circus, street theatre, and puppetry. These forms are often considered more as entertainment than fine arts, but they each also have long histories and are culturally significant.

The modern tent circus dates back to the mid 19th century and includes acrobats, trapeze artists, and various gymnastic and comedy routines. Puppetry goes back at least 3,000 years and involves the use of inanimate figures as surrogate actors and performers. Street theatre is a speculative public form of performance that adapts elements of both the circus and puppetry, and is used as both a means of survival and social critique.

Alternative performance genres are designed first as entertainment through the use of spectacle, or sensory impressiveness, and only secondarily as a form of instruction or critique.

Spoken word is a genre of performance that has been revitalized in recent years, but is one that goes back to the ancient world, with the oral traditions of indigenous cultures. It consists of the live or recorded performance of the written or spontaneously composed word, and as such is an aspect of literature.

In its modern form, it emerged out of the Harlem Renaissance of the 1920s, by way of the Beat Generation of poets and writers in the 1950s-60s, and most recently the influence of hip-hop culture. Writer Langston Hughes was an influential writer and poet who emerged from that Harlem scene.

Spoken word became more widely recognized with the release of Gil-Scott Heron's The Revolution Will Not Be Televised in 1970.


Gil-Scott Heron - The Revolution Will Not Be Televised (1970)

Performance art is a cross-disciplinary visual art form that involves abstract or symbolic actions on the part of the artist, either before a live audience, or documented through technological media in private events.

It was born out of the Dada and Surrealist modern art movements in the 20th century, and then fully emerged with the cross-disciplinary collaborations at Black Mountain College in the 1950s, moving into the mainstream of the art world during the 1960s-70s with the advent of conceptual art, that focused on ideas more than creating formal artworks.

Joseph Beuys - I Like America and America Likes Me (1974)
(watch 3:44 - 5:00)
Joseph Beuys was a post World War II German artist who came to prominence during a time when art was being questioned as an object or commodity. In his performances, he focused on the shamanic, the idea that the artist was a spiritual teacher.


Olivier de Sagazan - The Life of the Performer

Photography emerged not only as a medium to document performance, but also as a form in its own right, one that developed its own language and history with regard to performance. 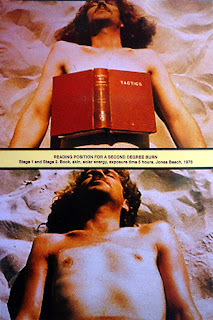 Artists such as Dennis Oppenheim, who emerged within the era of Conceptual Art, and Cindy Sherman, a Feminist photographer from New York in the 1970s, both used and critiqued the documentary approach of photograph in their performance photographs. 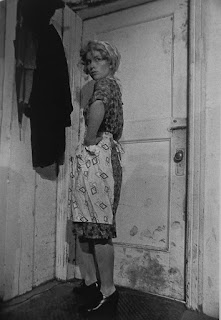 Though at times it appears very real, in cinema, as in photography, performance is mediated through technology. Film performances can seem to take place in real time, but are carefully scripted and acted.

Marlon Brando developed his acting style using techniques learned from Constantin Stanislavski, which came to be known as method acting, and focused on an intense form of realism.

In this film, and others, such as A Streetcar Named Desire, he performed roles that were at once masculine and aggressive, but also with aspects of sexual desire, qualities associated with female characters of the time. In a sense, he embodied a more sensitive and changing awareness of male identity in 1950s America.

The post-apocalyptic film Mad Max: Fury Road features many dystopian sets, costuming, and characters, among them Imperator Furiosa, played by Charlize Theron. Her character expands the notions of both what a woman and a person with disabilities is capable of, in standing on equal ground with the male characters while retaining her feminine qualities.